RC4 (also known as ARC4) is a simple stream cipher. It was designed in the late 1980s and its internals became known to the public in the mid-1990s. While it is a very simple and fast crypto algorithm, security researchers have discovered multiple flaws in it throughout the years. Today, it is just another broken stream cipher.

However, it is still used by software systems in the wild. Many malware families use it for encryption or better said: just for obfuscation purposes. Due to its simplicity and speed, malware authors embed it directly in their source code or statically link it into their binaries. For instance, ZLoader utilizes it to decrypt its configuration and Smokeloader encrypts its network traffic with this stream cipher.

Even though they could utilize one of the crypto APIs offered by Windows like the WinCrypt* functions, malware authors likely prefer this way as another way to ensure malware analysts’ job security.

In contrast to other ciphers, RC4 does not rely on any constants that make it easy for tools like findcrypt-yara to detect it in the binary. Nevertheless, tools like capa that take the assembly code structure of the binary into account are capable of detecting RC4. More on how capa does this later on.

While explaining RC4 is out of scope of this blog post (Wikipedia does a great job!), one of the most interesting parts of the algorithm is Key-Scheduling Algorithm (KSA). In a nutshell, it initializes an internal array based on the provided key that is later utilized by another algorithm to encrypt / decrypt. In pseudo code KSA looks like this (taken from Wikipedia):

The internal array S contains all possible byte values from 0x00 to 0xFF. It is permuted in the KSA. This usually compiles down to something like the following: 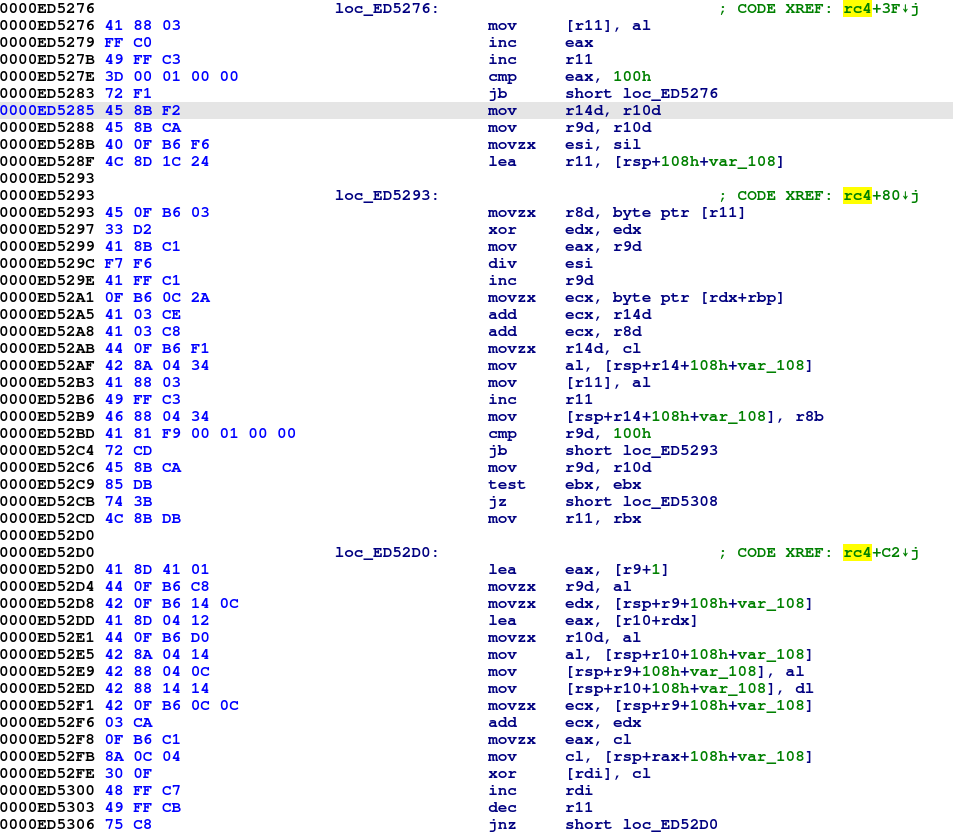 The first and second blocks are the actual KSA. Note the two cmp instructions (cmp eax, 100h and cmp r9d, 100h). These are part of the two for loops are seen in the pseudo-code (lines 1 and 5). The third block is the Pseudo-random generation algorithm (PRGA) used to encrypt/decrypt the plain/ciphertext. I won’t go much more into the details of the PRGA, please refer to the great Wikipedia article on RC4.

These two for loops in the KSA are something where we could detect the presence of RC4 in the binary. But mind possible false positives! For years, I utilized a simple yara rule to detect this stream cipher.

As you can see, this rule targets exactly the cmp instructions found in the KSA. While there may be better ways to do this, this is still a very fast approximation.

Nowadays, we have tools like capa that do a better job. But how does capa does it? I’ve promised to tell you: on one side, capa detects if a binary is linked against OpenSSL or imports WinCrypt functions. This is trivial as you can see in the rule linked-against-openssl.yml, which performs simple string matching:

On the other side, capa detects the KSA and PRGA algorithms of RC4 based on the assembly. This is more interesting since capa takes the structure of the binary into account. The rule encrypt-data-using-rc4-ksa.yml detects the KSA as follows:

The second way detects optimizations where instead of bytes DWORDs are written by the KSA (lines 38-46). For instance, the password cracker John optimizes the KSA like this (see opencl_rc4.h). It comprises an initialized array of 64 DWORDs:

Now we can understand where the constants 0xFFFEFDFC and 0x03020100 come from. Such an optimized version of RC4 was actually utilized in the original XBOX bootloader (there we can also see the utilization of the DWORD 0x4040404).

Let me tell you a tiny anecdote. A couple of years ago, a junior coworker reversed the whole RC4 algorithm in a malicious binary and told some colleagues and me that they analyzed a custom crypto algorithm. We told them that this was just plain old RC4. The coworker was a little bit upset but they likely learned a lot from their tiny adventure in RC4. I hope that now you are capable of spotting RC4 in (malicious) binaries and I’ve just saved you a couple of hours of reversing.

Thomas holds a PhD in computer science. He is passionately engaged in malware analysis, threat actor tracking, and bug hunting. Throughout the last years he has found numerous vulnerabilities in low-level software and participated in several botnet take-downs. In his blogs he tells techies and non-techies stories about his adventures in binary code wonderland.